Canadian International Peace Project
The Canadian International Peace Project (CIPP) is a novel and unique non-partisan organisation that has brought together diverse groups and individuals to work on issues and projects relating to local, national and international peace, security and development. Through partnership on events and projects, the CIPP fosters mutual respect and sustainable relationships among diverse groups including those in conflict with each other.

OTTAWA: Jewish- Somali Mentorship Program will be hosting a mentor training session on Thursday, July 22, 2010, at the Jewish Family Services Center, 2255 Carling Ave, Suite 300, Ottawa. Session is set to start at 6:30 pm. We ask mentees to attend at 7:30, where they will have the opportunity to speak and mingle with prospective mentors during a reception.

We encourage and welcome all mentors and mentees, even those interested in joining but have yet to sign up, to attend. The CIPP will keep you posted on further details or alternatively you can reach the CIPP at canadian.int.peace.project@gmail.com.
Posted by Canadian International Peace Project at 8:04 AM No comments: 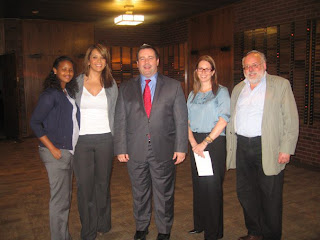 On Wednesday, June 16, 2010, professionals from the Jewish community in Ottawa participated in the Canadian International Peace Project's mentor information session of the Ottawa phase of the Jewish-Somali Mentorship Program at the Machzikei Hadas Congregation. Over forty enthusiastic members from different professional fields attended the session where they heard Minister of Citizenship, Immigration, and Multiculturalism, The Hon. Jason Kenney, praise the program and described it as "the single most important project for my Ministry."

CIPP Governor, Rabbi Reuven Bulka, shared his thoughts about the Project and stated that "this could arguably be a watershed project," which leads to more social cohesion in Canada.

The Ottawa event was organized Mark Zarecki, Director of Jewish Family Services in Ottawa and Monica Kugelmass, the Director of Canadian Parliamentary Coalition to Combat Anti-Semitism, who chaired the event. Ms Kugelmass is also a mentor in the project. The Hon. Irwin Cotler was unable to attend because of another committment but has volunteered to be a Mentor in the Project.

The information session was a huge success given the high number of individuals who are willing to sign on in order to become mentors to the large number of mentees who have already signed up.

The goal of the Jewish-Somali Mentorship Project is to aid in the creation of a successful cadre of Canadian-Somali professionals who can assume greater leadership roles to assist with the development of their community as well as contribute to Canadian society at large.

This is the first time in Canada or anywhere else in the world that the Jewish community and a large Muslim community are working so closely together at a national level.

"This mentorship project is so greatly needed in the Canadian-Somali community and it will serve as as a model for other communities around the world." according to Iman Salah, who is a York University student and summer intern at the Canadian International Peace Project. Ms Salah is also a mentee in the Project.

The Canadian International Peace Project (CIPP) is a novel and unique non-partisan organization that has brought together diverse groups and individuals to work on issues and projects relating to local, national, and international peace, security and development. Through partnership on events and projects, the CIPP fosters mutual respect and sustainable relationships among diverse groups including those in conflict with each other.
Posted by Canadian International Peace Project at 10:43 AM No comments:

The Somali Mentorship Project is one of a series of collaborative initiatives being spearheaded by the Canadian International Peace Project. This project is intended to aid in creating a successful cadre of Canadian Somali professionals, who can then assume greater leadership roles to assist with the development of their own community and contribute to Canadian society at large.

Mentorship refers to a developmental relationship between a more experience elder and a less experienced individual, referred to as a mentee or protégé. With regards to our project, the elder, due to experience can guide and counsel the individual or mentee in terms of growth professionally and perhaps, personally as well. Mentorship is a two-way process, where both participants can benefit.

The CIPP is seeking mentors from the Greater Toronto professional community to participate in an innovative mentorship project, between the local Professionals and the Somali Community. Mentors will assist Canadian Somali university/college students and young professional to pursue their professions. Benefits include;
•Personal satisfaction and reward gained from helping another person
•Opportunity to share professional and educational experiences
•Higher profile for your company, industry or community
•Assisting the integration of Canada’s largest African diasporas community

Mentoring requires time, effort and participation from both parties involved,
Your assistance will aid in ensuring successful, confident Canadian-Somali youth, resulting in a stronger Canadian Somali community and Canadian society at large.

If you have any questions or are interested in participating please email us at canadian.int.peace.project@gmail.com or call(416)384-0123.

Stay tuned for the clip of the Shirin Ebadi event on youtube.
Posted by Canadian International Peace Project at 12:01 PM No comments:


Visit her website at: www.globalenrichmentfoundation.com
Posted by Canadian International Peace Project at 8:50 AM No comments:

Jewish Somali Project Off to a great start in Ottawa Over a hundred members of the Ottawa Somali community braved a rainstorm on the evening of Saturday, May 8th, 2010 to attend an information and registration session at Carlton University's Minto Center. The Canadian International Peace Project and the Canadian Somali Congress invited potential mentees from the Somali community in Ottawa to be part of a groundbreaking mentorship project that started in Toronto between the Canadian Jewish and Somali communities. Given the great interest in the project, mentors will also be recruited from outside the Ottawa Jewish community to cope with the large numbers of Canadian Somali college and university students as well as young professionals requesting matches with mentors.

Ahmed Hussen, National President of the Canadian Somali Congress stressed the importance of this project in assisting to develop the first cadre of young Canadian Somali professionals and leaders who will in turn reach back into other communities to help those in need. This project builds on the groundbreaking work already being done between the Jewish and Somali communities in Ottawa by Mark Zarecki, Executive Director of the Jewish Family Services and members of the Ottawa Somali community. The Jewish-Somali Mentorship Project not only assists in the integration of the largest African diaspora community in Canada but also acts as a model of how diverse communities can collaborate to promote greater social cohesion between diverse communities both in Canada and in the international community. The Jewish-Somali Mentorship Project is extraordinary in that it is the first time in Canada or anywhere else in the world that the Jewish and a large Muslim community have come together to work at a national level.

CIPP's Mark Persaud and Ahmed Hussen joins Amanda Lindhout in Red Deer, Alberta to launch Somali women scholarship program
Mark Persaud, Amanda Lindhout and Ahmed Hussen at First Christian Reformed Church in Red Deer, AlbertaThe Canadian International Peace Project and the Canadian Somali Congress represented by Mark Persaud and Ahmed Hussen and Professor Hussein Warsame of the Haskayne School of Business at the University of Calgary were invited by Amanda Lindhout to support the launch of the Somali Women Scholarship Program at the First Christian Reformed Church in Red Deer, Alberta, the Lindhout family church, on Sunday, May 16th, 2010. The Canadian International Peace Project and the Canadian Somali Congress are partnering with the Global Enrichment Foundation on this initiative. Ahmed Hussen has been made a founding Director of the Scholarship Program.Amanda Lindhout who was held hostage for more than 15 months in Somalia is also starting a foundation to send women in the war-torn country to university. Amanda Lindhout hopes the charitable foundation will be able send 10 women to school next year and 100 women over the next four years in the country where only four per cent of women pursue higher education. Each scholarship funded through public donations will be for $1,000, providing enough for university tuition and a living stipend. Until Lindhout’s Global Enrichment Foundation gets charitable status, she’s partnering with the Mary A. Tidlund Charitable Foundation, so tax receipts can be issued to donors. "I'm inspired by the resilience and strength of their spirit," said Lindhout. "Powerful social and economic change takes place when a woman is educated." Ahmed Hussen, Professor Warsame and Mark Persaud all supported Amanda Lindhout's view that educating women in Somalia is perhaps the singularly most important thing that could be done to move Somalia out of it's decades old civil war and chaos.
Posted by Canadian International Peace Project at 10:03 AM No comments: